Yesterday, the news broke out everywhere that Muhammad Ali had not been keeping well and had been admitted to a hospital under a serious condition. Many of his fans like me, after having read the news, just brushed it off our shoulders thinking “Ali’s a champ. Ain’t there nothing that can do anything to him. The man’s known to be invincible”. And within a matter of a few hours, the news was out that the Champ’s no more. Just like that, out of the blue, someone who could not be pinned down by racism, tough conditions, opponents, politics and Parkinsons among many others, was lost to time.

I grieved his death for a few hours before I realised that we haven’t lost the Champ. In fact, he is still alive and is going to stay alive for decades and centuries to come, owing to his legacy. While the likes of Rocky Balboa and party gave us inspiration, the fact still remains that they were all a work of fiction. However, Ali was a living fairy tale. If there was anyone who thought dreams never came true, all that was needed was watching an Ali game. The man moved like lightning in the ring, light on his feet, one moment here, the other moment there. Yet, when he hit, he struck like lightning. No wonder he said “Float like a butterfly, sting like a bee”.

While people like Martin Luther King Jr., Nelson Mandela, Malcolm X were fighting racism the political way, the legend had his own exclusive ways. At a young age, he decided that he would dominate “the white man’s game” one day, little did he know, that he would not just dominate, but own and dictate the game for generations to come. Before there was Pacquiao, Mayweather or Tyson, there was Ali. Undoubtedly  a showman, yet his games were watched not just for technique, thrill or entertainment. His games were watched for the fight. A man’s fight with his circumstances, a man’s fight for his beliefs, his identity, values, grit and obstinacy. Like any other athlete, he had his share of defeats. But what defined his as a champion was the fight in him, that never let a defeated match shake him off. After losing a match, he would often end up bouncing back stronger than ever, and if he knew one thing too well, that was to prove people wrong.

One of the few in the league of Pele and Jesse Owens, Mohammad Ali touched a billion lives, and though his loss is irreversible, his impact on people’s lives, attitudes and humanity as a whole will remain forever.

God bless your soul wherever you are, and this is the most heartfelt tribute to the man who taught the world how to fight against the odds in the truest sense.

Note: Attached below are a few of his famous quotes. 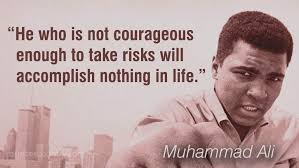